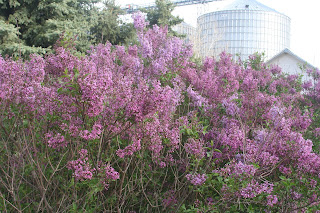 The seasons come and go and life continues even as blogging takes a three-year hiatus.  The purple blooms on the lilac bushes outside my back door signal the arrival of spring and remind me that last year at this time I was away in Texas offering support to my granddaughter as she began the battle of her life against breast cancer.  She continues to fight, showing more courage than seems possible from that remembered toddler who would climb onto the back of her highchair daring it to tip over.  She speeds toward life head on, just like that two-year-old who raced on short, chubby legs to the dog door where she poked her head out and shouted, “train, train,” each time one traveled past our back yard; even when no one else heard the “clack, clack” of its iron wheels beating against the tracks.


Shannon continues to thrive as she battles this horrid disease, faces her fears, works in her chosen career as a nurse and cares for her and husband Femi’s two-year-old son Camden, who reminds me so much of her at that age; just as daring and personable—a miniature individual with intelligent laughing eyes and a smile that melts.
My own life continues too as I morn lost loved ones, two long-time friends who remain ingrained in so many of my warm, happy memories and other dear-to-me people whose spirits walk through my mind at unexpected moments.
Life pulses on as my brother Stan and I deal with the loss of our third brother, this one estranged for over 20 years, and we attempt to figure out what emotions we should feel, how to forgive, how to remember the positives and let the negatives go.  “He might have been an asshole,” Stan said when our sister-in-law suggested we leave his remains for others to care for, “but he’s our asshole.”  How true, I thought, and smiled.
Life going on means encounters with the aging process—aches, pains and diminished energy—while exclaiming that getting old is better than the alternative though I admit to having no clue what that might be.  I suspect no one else does either, even those who swear by heaven and hell.
My writing life goes on as well; a novel that I can’t seem to finish, short stories of unique lives lived, a church history that coincided with a 100th anniversary celebration of its building and two commissioned memoirs that actually paid.
And, as always, life mandates food.
I’ve gone through a number of experimental phases over the past dozen seasons: cooking large pots of soup in a slow cooker, then freezing individual servings; grilling up a bunch of hamburgers and pork chops with the thought that I could just zap one as needed in the microwave; fixing entire meals then splitting them into ready-in-a jiffy plates.  Of these ideas, the only one that satisfied my taste buds completely was soup, the flavor and texture of which stands up well to freezing and reheating.
One soup that worked well in my freezer came about when some kind soul left two bags of onions at our local Post Office with a note that said: “Free onions.”  I started to walk off, leaving them for, someone more in need, then thought better of it.  Actually, I thought, French Onion Soup, and grabbed up one of the bags, which contained around a dozen nice yellow onions.  I used them all to make a double batch of the recipe below.  Keep in mind that French Onion Soup takes time but the result warms a winter day.

Directions:
1.     Preheat oven to 400° F
2.     Peel and halve onions then thinly slice root to tip.
3.     Melt butter in five- or six-quart Dutch oven over medium-low heat.
4.     Add onion slices, salt and sugar to melted butter; cover and cook for 30 minutes over medium-low heat.
5.     Stir onions and move pot to oven for one hour, stirring every 15 minutes.
6.     Remove pot from oven and add wine.  Stir to loosen any brown bits from pan bottom.
7.     Place pot on burner and cook wine over medium heat for five minutes.
8.     Add broth, minced garlic, thyme bundle and bay leaves to pot and bring to a boil.  Reduce heat and simmer uncovered for 45 minutes.
9.     To serve immediately, divide into six bowls, top with toasted Baguette slices.  Sprinkle with shredded Gruyere and place under the broiler until cheese is hot and bubbly, 1-2 minutes.
10.  If freezing, divide into six airtight containers, cool completely and date.


Note: I slice the Baguette into thick slices and freeze them in a separate bag.  When I feel like a bowl of French Onion Soup, I thaw out a serving of the soup in the refrigerator over night or thaw one in the microwave.  While I’m heating up the soup in a small pan, I pop a couple of the Baguette slices in the toaster, place the toasted slices on top of the hot soup, add the shredded gruyere and place the bowl under the broiler.  Yum!!
Posted by Solo Food Funk at 9:55 AM

Email ThisBlogThis!Share to TwitterShare to FacebookShare to Pinterest
Labels: Soup