A select group of family members began spending Thanksgiving at the farm of my Aunt Roberta and Uncle Bob sometime in the early 1980s.  In the beginning, the number of attendees filled the chairs around a large oak dinning room table.  The group included my aunt and uncle and their three sons, my mother, my brother Steve and wife Sandy plus children and grandchildren, and me.

Roberta’s legend as seamstress dissipated when compared to her fame as a cook.  My mother, whose cooking depended on her mood, loved to “drop in” at her sister’s farm around dinnertime.  Roberta, unfazed by the increased number of people around the table, peeled a few more potatoes, opened another can of vegetables and figured a way to stretch the meat.  The dinner appeared as if she planned the number of dinners.

Her sons, John, Glen and Gary, learned kitchen skills from their mother as they grew into men still living at home and unmarried.  John was the only one of the three that married, but he and his wife parted after the birth of a daughter.

Aunt Roberta called on her three sons to assist in the preparation of our annual Thanksgiving feast each year, with their main contribution the turkey cooked on a rotisserie located in a shed near the house.  The rest of us brought our share of the fare as well and waited patiently for the turkey, which debuted each year with a crisp-golden exterior and juicy, tender interior.

Dinner took less time to devour than to cook, but we sat satisfied afterwards, basking in our fullness and waiting for dinner to settle so we could indulge in the pies, at least one of those pumpkin, that beckoned to us from the counter where they sat filled with goodness.  Some years, Aunt Roberta added a chocolate cream pie to the mix, other years she presented her famous pineapple cream.  Whichever kind she decided upon, it always came with a thick covering of light meringue accented with golden peaks.

As time passed, the numbers around the table began decreasing, first by the leaving of children to other lives in other states, then with the death of my mother in 1997.  Uncle Bob followed a few years later and then Aunt Roberta.  Next came the deaths of my brother Steve and cousin John, both in 2009.  For the past two years, the four that remain, myself, my sister-in-law Sandy, and cousins Glen and Gary, continue to gather around a much smaller table, not yet ready to let go of the tradition.

The meal remains much the same, turkey, dressing, mashed and sweet potatoes, gravy, olives, stuffed celery sticks, deviled eggs and, of course, green-bean casserole.  This past year, Glen opted to prepare a turkey breast in the oven; not quite as splendid as the rotisserie-cooked bird of old, but still crispy and juicy.  The pies, pumpkin and this year pineapple cream, still beckoned us after our meal.  We remain grateful for each other’s company and the memories left by those who now join us only in spirit. 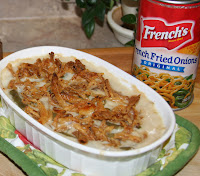 Sandy cooks the green-bean casserole each year, preparing it according to the recipe provided on the container of French’s French Fried Onions.  The original recipe calls for canned mushroom soup and canned green beans.  It is one of my favorite vegetable dishes, but a full recipe makes more than I need for one person so I set out to make my own version, which can feed two at one meal or one person with some leftover for a second meal.

Directions:
1.     Sauté mushrooms in butter or oil over medium-high heat until all moisture evaporates, 5-6 minutes.
2.     Stir in flour and continue to sauté one minute longer.
3.     Stir in milk and bring to a boil, stirring constantly.
4.     Stir in the green beans and 2 tablespoons of the French Fried Onions.
5.     Pour mixture into a 15-ounce oval baking dish coated with cooking spray.
6.     Bake uncovered in a 350°F oven for 20 minutes.
7.     Spread the remaining French Fried Onions over the top and bake 5 minutes longer.  Serve piping hot.
Posted by Solo Food Funk at 1:17 PM No comments:

Email ThisBlogThis!Share to TwitterShare to FacebookShare to Pinterest
Labels: Vegetables

Chowder with sunshine and ice-skating

Cretia and I grew up in neighboring states, she in Nebraska, me in Kansas.  We met in Wyoming where we both made stops on our way to where life took us, Cretia to California, me to Colorado.  We now sat in a patio café eating lunch while watching ice skaters glide over a man made rink a few yards away.

The patio café is part of the Hotel del Coronado located on a peninsula just off San Diego Harbor in California in the beach community of Coronado.  Cretia worked at the Hotel for eight years giving her an insight into the history of the place, which she shared with me on a tour after lunch.  According to Building The Dream, Elisha Babcock, Jr. and Hampton Story created the Coronado Beach Company in April 1886 and followed with the establishment of a number of other enterprises, including the Hotel del Coronado, built in 1888.  The hotel’s architecture offers a castle-like appearance in the Victorian era Queen Anne style with a roofline outlined in turrets, gables, dormers and round corner towers.  Its fulgent red tiled roof contrasts with the subtle blueness of the Southern California sky.

Inside, Cretia explained that the interior rafters contain no nails, with construction taking 11 months.  The book notes that construction utilized a number of woods, including Douglas fir for framing, California redwood, hemlock and cedar for the exterior, Illinois white oak in the lobby and Oregon sugar pine, selected because it lacks knotholes, in the Crown Room.  This fascinating hotel, filled with history and beauty, draws tourists from around the world.  We decided I must come back sometime, take a room and explore the full scope of its history and architecture.

When you think about it, we happen onto the people with whom we develop lasting friendships much as we stumble onto history.  Cretia and I happened onto each other nearly 30 years ago when she answered an ad for employment.  I handled accounting, inventory, shipping, receiving and some purchasing at a cattle hide company and needed an assistant.  It took all of five minutes to decide this smart, attractive woman would be the perfect working partner.  She was bright, cheerful and completely down to earth.  I liked her immediately and it took little time for us to develop a compatible working relationship that soon matured into friendship.

We found much in common, including a love of books and animals.  Cretia credits me with giving her a copy of Atlas Shrugged, something I could have done, but do not remember.  I credit her with giving me a Calico cat named Kate, something she did, but does not remember.  She also does not remember encouraging me to pursue my writing career by purchasing a weekly newspaper, but I do.  That decision, made with her encouragement, changed my life in many good ways and I credit her for giving me the courage to write.

Cretia now lives, surround by books, with her husband Dave and two boxers, Maggie and Ringo, in San Diego.  I, now retired after publishing a weekly newspaper for 27 years, live in Colorado with my eight-pound wonder Poodle, Brieanna and Katy Joe, my third Calico cat.  Books fill my house as well.  Cretia and I admit to reading critically and loving the look and feel of books.  Our common interests no doubt explain why we can go years without seeing each other and immediately fall into conversation as if our last visit happened yesterday.

As we sat on the Hotel Del Coronado patio basking in the warm California sun, we enjoyed soup and salad.  Amazingly, we even tend toward the same kinds of food.  Cretia chose the clam chowder with a spinach salad dressed with pear slices, candied pecans and blue cheese.  I selected the same salad, but opted for the butternut squash soup because it contained truffles, something I wanted to experience.  We decided to hold off on wine until later that evening, when Dave joined our conversation and we heavily debated politics.  Our visit ended much too soon, but implanted more cherished memories of a dear friend.

It was easy, once back at home, to duplicate the salad and butternut soup minus the truffles, but fresh clams for chowder are hard to come by on the high plains of Colorado.  Still, chowder stayed on my mind so I decided to make a fish chowder based on a recipe I found in my latest copy of Cooks Illustrated.  This recipe makes enough for one large or two small servings.

Directions:
1.     Coat 1-quart saucepan with oil and add bacon.  Sauté over medium-high heat until crisp, 3-4 minutes.
2.     Remove bacon and drain on paper towel.  Remove all but about 1 teaspoon of the bacon grease from saucepan.
3.     Add onion and celery to saucepan and sauté until soft, 2-3 minutes.
4.     Add water, thyme, bay leaf and seasonings to saucepan and bring to boil.
5.     Place fish fillet in boiling water.  Remove saucepan from heat and allow fillet to poach for five minutes.  Remove fillet from saucepan and set aside.
6.     Place potato in saucepan, bring to boil, lower heat and cook until potato is tender, 15-20 minutes.
7.     Remove the bay leaf, flake fish and add to saucepan along with milk.  Reheat soup, but do not allow to boil.  Serve with your favorite crackers and garnish with the bacon bits.